Churchill is a planned town situated 9 km south of Morwell in the Latrobe Valley, Gippsland. The area was occupied by Hazelwood pastoral run from 1844. In the 1870s, selectors took up land, grazing sheep and cattle, cropping and dairying. In 1886, a branch railway line was constructed south from Morwell. A station and goods siding were built at Hazelwood in 1888, but a township did not develop. Several schools served the district, some localities also having a hall or church. In the early 1920s, a large property was subdivided for soldier settlement, forming the Hazelwood Estate community. A bushfire devastated much of the area in 1944.

In 1971 Hazelwood power station was completed south of Morwell. Farms were acquired for the damming of Hazelwood pondage and other industrial undertakings. A planning scheme for a new town was approved in 1964. The town was to be at the foot of the Strzelecki Ranges, overlooking the pondage. The site was chosen for its pleasant location and relative freedom from air pollution. It was not over rich coalfields and was in close proximity to the larger towns and power stations in the Latrobe Valley.

The new town was to include private as well as Housing Commission estates. The houses were to be all brick and of varied designs with residential areas were to be grouped around the town centre so that people could walk through parks and under main roads to the town centre. There were to be 11 neighbourhoods named after the district's pioneering families. Each neighbourhood would consist of about 600 homes grouped around parks, a school and corner shops. There was to be an area for light industry. The proposals were ambitious, with plans for a shopping mall, large department store, market, theatre, civic centre, cultural centre, hotels, offices, bus terminal, racetrack, golf course and area for light industry.

Land was compulsorily acquired and house construction commenced in late 1964. The first families took up residence in late 1965. The town was first known as Hazelwood, but in February 1965, the government changed the name to Churchill to honour the English statesperson, Sir Winston Churchill. The local response was very negative and very vocal and it was November 1966 before the issue was definitely settled in favour of Churchill. A bronze coloured structure 102 feet high represents a cigar, symbolising the town's link with Churchill. The issue of the town's name re-emerged in 1987. After much lobbying, a survey was taken and a close result favoured retaining the name Churchill.

Growth of the satellite town was initially slow so purchase conditions were relaxed. By 1968 the shopping centre was constructed. Progress accelerated by 1969 with more than 100 homes being built each year. Community spirit was strong, with the Citizens' Association formed in 1966 being a strong force in town affairs.

But then development in the Latrobe Valley slowed, consequently slowing Churchill's rate of development. Most residents had young families and were critical of the lack of community facilities. During the 1970s-80s, a Community Health Centre was established, as well as a Leisure Centre, hotel and secondary school with community library. In 1972, the newly established Gippsland Institute of Advanced Technology began operations at its new site at Churchill and later merged with Monash University.

By 1976 the population was 3500, by 1981 about 4800 and by 1991, 5600. Churchill is identified as a University town situated on Monash Way 9 km south-east of Morwell. The Monash University campus is located on a 64 ha campus. The University of Ballarat took over the Monash campus and changed its name to Federation University Australia Churchill campus in 2014. The town is attractively set on the foothills of the Strzelecki Ranges adjacent to the 520 ha artificial Hazelwood Pondage. There are three primary schools, a church, secondary school, four pre-school centres and health and recreation facilities.

Although the town has many facilities, it is not as grandiose as originally planned. In 1991, the population was only slightly more than in 1986, well short of original projections. A large proportion of Churchill's workforce was employed by the State government, so that the rationalisation and privatisation of the power industry had a negative impact on the town. The general economic recession was also felt severely, with the closure of a lingerie manufacturer previously employing 250 people. However, the staff and students of the university contribute to the economic and social welfare of the town. Rather than a self contained town, Churchill has become a pleasant dormitory suburb with people travelling to the larger nearby towns for major shopping and entertainment. In the late 1990s the Churchill shopping centre was redeveloped.

Census populations for Churchill have been:

S.M. Legg, Heart of the valley: a history of the Morwell municipality, Morwell 1992 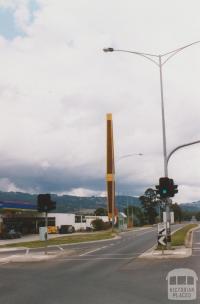