Casterton, a rural town in western Victoria, is at the junction of several roads and the Glenelg Highway. It is 40 km from the South Australian border and 60 km west of Hamilton.

Casterton was the heartland of Thomas Mitchell’s Australia Felix. Mitchell, the New South Wales Surveyor General, travelled south-westerly, entering the Wando Valley and crossing the Glenelg River near Casterton. He then saw the Wannon Valley east of Casterton, describing all the land as containing excellent soil and grass, surpassing in quality any he had seen in New South Wales. When Mitchell encountered the Hentys in Portland he told them of his discovery.

In 1842 or thereabouts, the Glenelg Inn was opened at the river crossing. Ten years later the town of Casterton was surveyed, and the name is thought to have been inspired by Casterton, in Westmorland, England. By the end of the 1850s Casterton’s population was about 150 people, but during the next decade its population more than doubled.

In addition to the Anglican church (1857), Presbyterian and Anglican churches were built (1865-66) and there were a court of petty sessions and the Glenelg shire office (1866). The Casterton racecourse began in 1861.

During the 1870s and 1880s some of the pastoral runs were subdivided for farms and Casterton’s population again doubled. A flour mill was opened in 1873, the Casterton News began in 1869 and several bank premises and stores also began around that time. A railway line was built from Branxholme to Casterton in 1884. The early 1900s also saw the beginning of closer settlement (Wando Vale estate), and Casterton was described in the Australian handbook in 1903: 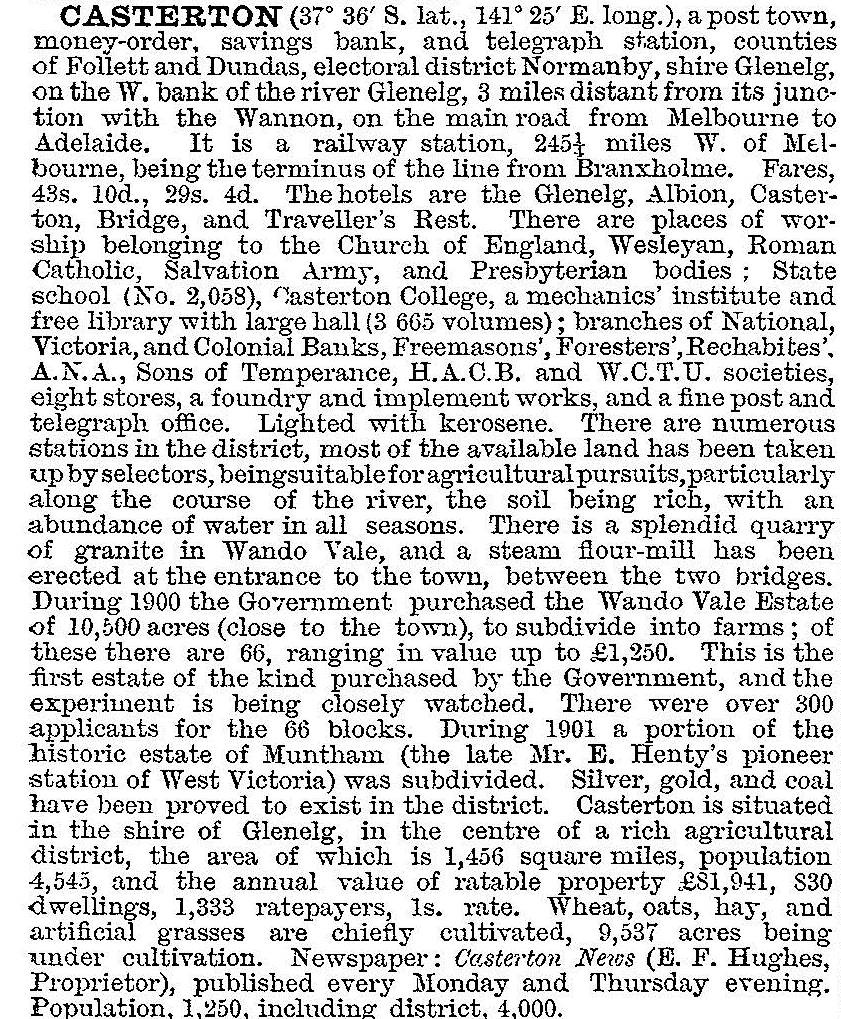 Another, and larger, closer settlement scheme occurred during 1900-10, creating about 100 farms. A hospital was built in 1908 and a higher elementary school was opened in 1915. Mary Gilmore lived in Casterton during 1907-12, getting her start by writing the Women’s Page for The Bulletin. After World War I some of the remaining estates were subdivided for soldier settlement, and this was repeated after World War II. Several of the pastoral homesteads and/or outbuildings have survived, notably Merino Downs (stables), Runnymede (homestead), Roseneath (homestead and garden) and Warrock. The last comprises 57 timber buildings, the earliest dating from 1844. The whole of the site is registered for heritage purposes and is open to visitors. Dunrobin and Muntham homesteads are also registered.

Since the 1960s Casterton’s population has declined as its sheep and wool production has encountered shrinking markets.

Casterton has State primary and secondary schools, a Catholic primary school (1902, 1958), a hospital, Anglican, Catholic and Uniting churches, a nursing home and a community centre in the old courthouse. The Casterton town hall (1937) dominates the main street. There is also a tourist information centre, and a museum in the heritage registered railway building. Casterton has two hotels, two motels, a shopping centre and a caravan park. On the periphery of the town there is a showground, two reserves, facilities for swimming, tennis, polocrosse, bowls and croquet, and further out there are the racecourse and the golf club. The railway line was closed in 1977. The Casterton News is published weekly.

Casterton holds an annual Australian Kelpie dog muster. An early, perhaps the first, evidence of Kelpie breeding was a litter born on Warrock station in 1872. The litter was possibly a cross between a Collie dog and a part/pure dingo. In any event, the Kelpie had an advanced stock-mustering instinct and great stamina as a working dog.

In 1994 the Glenelg shire was expanded southwards and the administrative centre was moved to Portland. Casterton retained a service office.

Casterton is 370 km from Melbourne, west of the 'lakes and craters' country in the Western District. It has an agriculturally rich hinterland with several historically significant homesteads from an age when Australia rode on the sheep’s back. Its prosperity was mirrored by its buoyant populations. Much has changed though, for example:

In the shire centenary history (1964) there appeared a multi-fronted modern ‘departmental store’ in Casterton, built by storekeeper, Stanley Stookes. Much of the town’s solidly built infrastructure and private buildings retain the look of their period.

Casterton’s census populations have been: