The township of Cann River is situated at the junction of the Princes Highway and Cann Valley Highway, 455 km east of Melbourne. The town is named after the Cann River which flows south from the Victorian-New South Wales border, reaching the sea through Tamboon Inlet. The river’s name is thought to be an Aboriginal word of unknown meaning.

Two pastoralists, Allen and Stevenson of Twofold Bay, grazed cattle in this area as early as 1841, but the run was abandoned as Aborigines speared large numbers of their cattle. A later squatter, Alexander, experienced similar difficulties and is reputed to have retaliated by shooting many natives. The Aborigines were of the Bidawal tribe, a small group regarded as outcasts.

When the Morgan family, the last runholders, took up Cann station in about 1879 the area was still very isolated. They had to cut their own track for 96 km from Marlo to the west. After surveys enabling selection, the Morgan family selected further land. Other settlers arrived from the mid-1880s to early 1890s.

Morgan's homestead was the focus of the small community, being the location of the post office from 1890. Around 1900, a small settlement developed 9 km to the north. A store, school, church and hall were soon serving the area which by 1911 had 163 inhabitants. Most settlers had cleared small areas along the river valley. Pigs, fattened on maize, were the most common livestock. Cattle were run in the bush and many farms also had a few dairy cows.

In 1928 a large brick hotel was built to the south. The Princes Highway was routed that way and another community began to develop there. To distinguish between these two townships, the earlier Cann River settlement adopted the name Noorinbee, an Aboriginal word of unknown origin, which was already the name of the parish.

Cann River residents had built a school building in 1926 which was replaced by a government school in 1937. A medical building was also constructed by local labour in the late 1920s. The Bush Church Aid Society, a Church of England organisation based in Sydney, provided nurses. St John's Anglican Church was built in 1928, with funds donated by Edith Reece, an English woman who worked as a deaconess at Cann River from 1922 to 1932. The lych gate, opened in 1947, is dedicated to the memory of three pioneers, including Edith Reece. The area was still very isolated. A bridge was built over the Cann River at the township in the late 1920s but roads were poor, being only narrow tracks.

From the 1950s the Cann River district experienced considerable growth. Several sawmills began operations, cutting from private properties and later from Crown Land. These mills attracted new residents, many being European migrants. In 1977, there were five mills, the whole industry employing about 80 people. In the late 1970s, the Forests Commission established an office there. Most of the Cann Valley is state forest. Noorinbee remained basically a farming community, but also experienced growth at this time.

Until 1952, Cann River school had only one teacher. By 1961, there were three teachers and two additional classsrooms for the 79 students. In 1965, classes were established at the secondary level and TAFE later established a branch. The medical dispensary and nursing service closed in 1964, but in 1972 the Cann Valley Bush Nursing Centre commenced operations. A sports arena was cleared in the early 1950s and the hall opened in 1958. The district was connected to the state electricity grid in 1970.

Bushfires and floods are an ever present threat in this area. Severe floods have occurred regularly over the years. In 1983 the Cann River district was devastated by a fire which burned for many weeks and fire breaks out in most summers.

The farming and timber industries continued to provide the main employment but tourism became an important source of income. Travellers to Canberra and the south coast of New South Wales break their journeys here. Cann River is also a convenient base for fishing and boating at Tamboon Inlet and bushwalking and camping in Croajingolong National Park.  By 2011 there was one sawmill left, and food outlets had increased from three to six.

Cann River has a hotel, two motels, a caravan park, a small supermarket, three motor fuel stations, an Anglican church, two halls and a Prep to 12 school (47 pupils, 2014).  Noorinbee school stayed open, with an enrolment of 6 in 2014.

Cann River's census populations have been:

Township of Cann River, Parish of Noorinbee, County of Croajingolong: an account of the development of the Cann River town and district ..., 1977 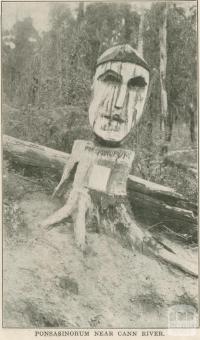