Buxton, a rural village, is on the Maroondah Highway between Healesville and Alexandra, 80 km north-east of central Melbourne. It is on the Steavenson River, just short of where the river joins the Acheron River. Both streams are inland of the dividing range and are part of the Goulburn system. Buxton was named by a government surveyor after a place in England.

The settlement of Buxton began with farm selections in the Acheron valley in the mid-1860s. A post office opened in 1873 and a school two years later. By the mid-1880s Buxton had a bush pub, several farms and a noted cheese and dairy farm. The estimated population was 100. An Anglican church was built in 1895 after services had been held in the hall for about a year. Buxton was described in 1903 in the Australian handbook:

Healesville and nearby Marysville each had numerous guest houses, and by the early 1950s guest house holidays had spread to Buxton. The Sands and McDougall directory (1953) recorded six guest houses in Buxton, including the Cathedral which was named after the majestic range north-east of Buxton. There was also a sawmill, a produce merchant, numerous farmers and graziers, a general store, a hotel and a motor garage.

Buxton had been menaced by bushfires and a fire brigade was formed in 1943. It became part of the CFA in 1945. In 2009 the brigade was sorely tested by the Black Saturday fires when 35% of Buxton's houses were lost. The village centre survived.

Buxton was part of Healesville Shire until 1965 when it was transferred to Alexandra Shire. Both Buxton and Alexandra are inland of the dividing range.

Buxton has a hotel, a general store, an Anglican church, a primary school (31 pupils, 2014), a hall, a recreation reserve and a trout and salmon farm. Its census populations have been: 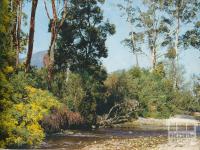