Burwood and Burwood East extend eastwards from Melbourne, beginning at a distance of about 11 km from Melbourne's centre and ending 17 km from the centre, from Warrigal Road to Springvale Road. Their southern boundary is Highbury Road, the historic boundary of Nunawading Parish and between local government areas.

Burwood's origins were in the village of Ballyshannassy, about 1 km east of Warrigal Road and which was surveyed in 1858. Ballyshannassy's location is identifiable by the Burwood cemetery, police station and state school (1865-1992, Victorian Heritage Register), along with an unusual road layout off the south side of Burwood Highway. The commercial hub, however, grew around the intersection of Warrigal Road, Toorak Road and Burwood Highway, which survives as a strip shopping centre. ‘Burwood’ spread one kilometre westwards from Warrigal Road when the Hartwell Railway Station was renamed Burwood in 1909.

Ballyshannassy surrendered its name to Norwood, which in turn surrendered its name to Burwood in 1879. Burwood was the name of a house now known as Invergowie, built by Sir James Palmer in 1852 in Hawthorn West. The track to present day Burwood was Burwood Road (Hawthorn), Camberwell Road, and Toorak Road which becomes the Burwood Highway. The name travelled eastwards along the track.

In 1912 the tram line from Melbourne was extended along Toorak Road to Warrigal Road, Burwood. Land subdivision for residences followed. Warrigal Road in the pre and early postwar years was a dividing line between well settled residential areas with made roads and lightly settled areas which slowly absorbed the small farms and orchards.

‘Burwood’, 6 km long, is distributed about the arterial Toorak Road and Burwood Highway, and of varying north-south dimensions. It has been shared by several municipalities: recently Camberwell, Box Hill, Nunawading and Waverley, and by Boroondara, Whitehorse and Monash after the 1994 local government amalgamations. Because of that, Burwood's extent is diffuse and is best traced by postcode boundaries.

Burwood East was described in the Victorian municipal directory in 1930:

As postwar development moved eastwards along Burwood Highway intermittent new localities emerged. Bennettswood is just to the east of the old Ballyshannassy, then Burwood Heights and finally Burwood East. Most of Burwood East was previously Tally Ho, and Tally Ho survives as the name of a business park on the site of the former boys' home and as a small shopping centre just south of the Burwood East postcode boundary. The boundary between Burwood and Burwood East is Middleborough Road.

The postwar spread of residential settlement along the Burwood Highway corridor can be traced by the opening of schools: Bennettswood primary school, Burwood high school and Burwood technical school opened between 1954 and 1959; and further east, Burwood Heights primary and high schools opened in 1965 and 1970. Wattle Park, part of Burwood, had a primary school for the Burwood Boys' Home in 1914, but residential settlement caused the school to be enlarged in 1951. The high school opened in 1962. The Orana Peace Memorial Homes for Children (1953) later the Orana Methodist Homes, were in Elgar Road.

Until 2000 Burwood also included the area south-west of the corner of Warrigal and Toorak Roads, west to the railway line and south to Baker Parade. The area was made part of Glen Iris, a place name with better real estate prospects than Burwood. Burwood railway station is in Glen Iris, 1.3 km outside Burwood's suburban boundary. Similarly, Burwood also included an area between Toorak and Riversdale Roads, west of Warrigal Road to Back Creek (a waterway mostly changed to a barrel drain). That part of Burwood became part of Camberwell in 2000.

Burwood Highway, apart from having several motor car dealers, is the address of the Presbyterian Ladies' College, Mount Scopus College and a Deakin University campus. Its corner at Blackburn Road was selected by Myer as a site for its first drive-in shopping centre (but put aside for Chadstone), and in 1970 it was the site of the first Australian Kmart.

Burwood was at the forefront of outdoor cinema when postwar Melbourne's first drive-in theatre was opened in 1954 just east of the old Ballyshannassy village, in a valley beside Gardiners Creek which was conducive to foggy nights. After the closure of the drive-in, Burwood almost had a second premiere with metropolitan Melbourne's first freestanding cinema complex about 2 km east, at Middleborough Road. The proposal was rejected on planning grounds, as a menace to freestanding shopping centres already fitted out with cinemas.

At the eastern (Springvale Road) end of Burwood East there is the Tally Ho business park and the Burwood East reserve and mechanics' institute (1925).

The ageing of middle Burwood was evidenced by the closure of Burwood primary, high and technical schools, 1987-92, and the closure of Wattle Park high school in 1992. Vision Australia's school for the blind closed in 2009. 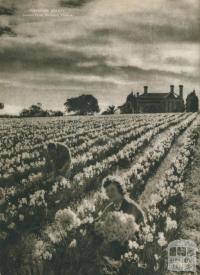