Bruthen is situated on the Tambo River, 24 km north-east of Bairnsdale and 300 km east of Melbourne. Bruthen, or Brewathan as the area was first called, is thought to be a word of Aboriginal origin meaning bracken or place of evil spirit. In the 1840s, the first pastoralists used the Tambo Valley as a route from the Monaro to the Gippsland plains. Matthew and Thomas Macalister took up the area as Kilmorie run in 1845. By 1858, a hotel, a store and a blacksmith near the Tambo River were catering to drovers using the stock routes and packers and miners travelling north to the mining settlements around Omeo.

In 1859 a township was laid out, 2 km to the west, at the junction of the main routes. It was named Tambo as there was already a township named Bruthen between Sale and Port Albert. However, the old site at the river crossing remained the more population location.

When Land Acts made selection possible in the 1860s, the Tambo Valley was quickly taken up by settlers. On the fertile river flats, wheat, oats and potatoes were grown and by the 1880s maize and hops had become important crops. Sheep and cattle were grazed on the foothills. Many settlers stripped wattle bark and split rails to supplement their living.

The lower Tambo River was navigable and in the 1860s steamers began to carry produce from Sale, Bairnsdale and Bruthen to Melbourne. A wharf was built at Mossiface, several kilometres downstream from Bruthen. In 1884 a wharf, known as Batten’s Landing, was built further downstream. It had fewer problems than Mossiface and it also became a busy port. The river had to be cleared of snags and dredged at the mouth to keep it open. A bridge was constructed over the Tambo at Bruthen in 1872. However, silting was a great problem and by the 1890s it was almost buried.

The township of Bruthen developed, with a range of stores, post office, school, Mechanics’ Institute, and social and sporting organisations. Bruthen was the administrative centre of Tambo Shire from 1882 to the late 1980s when the shire offices moved to Lakes Entrance. The Australian handbook of 1887 stressed Bruthen’s prime location on important trade routes: 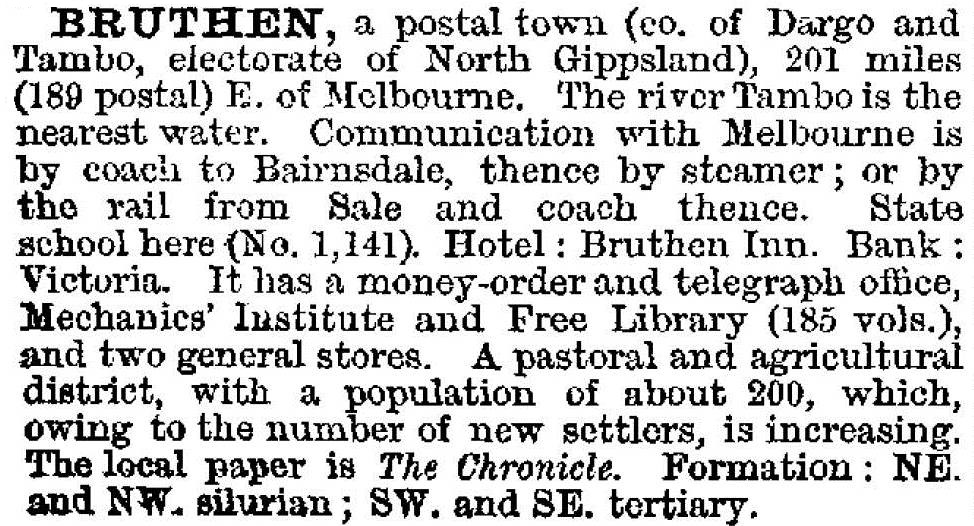 By 1900 Bruthen was growing steadily even though hop culture was declining due to poor prices, increased competition and red spider damage. The last crop was harvested in 1915. Maize became the main crop, with wheat, oats, potatoes, peas, beans, sugar beet and some fruit being grown. There was some dairying, with creameries and butter factories being established. The river trade was still profitable. The 1903 Australian handbook described a substantial township of 350 people: 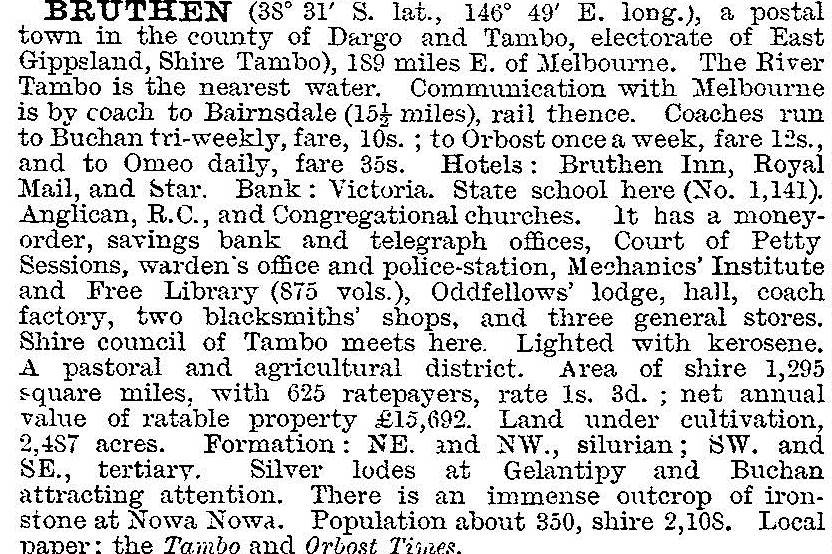 To the west of Bruthen the Tambo township was beginning to develop. When a post office was opened in 1911, the township was renamed Wiseleigh in honour of the Federal parliamentarian for the area, G.H. Wise.

The Bairnsdale to Orbost railway line passed through Bruthen. Regular services commenced in 1916. However the railway did not stimulate development as expected. During the Depression of the 1920s, the shire suffered a decline in population. During the 1930s the steamer traffic disappeared. Competition from road and rail traffic was great and silting of the river became an insurmountable problem. By 1935 the rail passenger services had ceased. Bruthen itself was not adversely affected. Its population rose from 530 in about 1920 to 580 in the late 1930s. The smaller townships, however, did lose amenities.

Bruthen was described in the 1938 Victorian municipal directory:

The Bruthen area has extensive timber resources. In the 1940s two factories making handles for axes and tools were set up and there have been a number of sawmills over the years. In the 1960s and 1970s the mills were troubled by financial difficulties and distance to timber allotments. This affected the town unfavourably, with the population falling to 568 in 1976 and 449 by 1981.

However the population increased again, reaching 850 in 1994, with retirees and commuters to Bairnsdale choosing the quieter rural lifestyle.

Bruthen has a general store, the former shire hall and offices, a hotel, a recreation reserve, Anglican and Catholic churches, a primary school (40 pupils, 2014), a police station and a caravan park. Its position on the Great Alpine Road has stimulated the opening of food outlets, a tourist information centre and a boutique Bullant Brewery. The former railway line has become a cycle trail, passing through Wiseleigh where houses have been refurbished.

There are some reminders of the past. At Mossiface, Calvert’s hop kilns, built in 1888 and listed in the Victorian Heritage Register, have been restored and a giant maize crib still stands. Near Bruthen is Fairy Dell, 48 hectares of rainforest set aside in 1967.  A walking track winds through this area of ferns and jungle vegetation which is restricted to a few locations in East Gippsland. Bruthen’s census populations have been: