Braeside is an industrial suburb with a metropolitan park, 26 km south-east of central Melbourne and immediately east of Mordialloc. Until 2002 Braeside included the suburb of Waterways. The name came from a farm property, Braeside, owned by members of the Keys family, east of the former Epsom Training track and Woodlands Golf Club, Mordialloc.

Braeside is on the former Carrum Swamp, which was gradually drained and brought into year round farm land from 1868. The Braeside farm was sold by the Keys family to Dr Arthur Syme, the son of David Syme, owner of The Age newspaper. Syme developed it as a horse breeding property. Adjoining Braeside there were small closer settlement blocks (1908-09). The village centre was at the corner of Lower Dandenong and Boundary Roads where there were a post office (1915-72), and a school (1915-82). The area was used for dairying and market gardens.

In the 1920s the Melbourne and Metropolitan Board of Works implemented a dormant plan for the provision of a second sewage treatment plant, as the diversion of sewage from the growing eastern suburb to Werribee was becoming untenable. It acquired 468 hectares of land, including Syme’s Braeside of 376 hectares. The Depression delayed the building of the Braeside sewage treatment plant until 1939, and the horse training facilities continued, leased by the owner of Phar Lap.

The treatment plant was decommissioned when the South Eastern Purification Plant at Carrum and Bangholme came into operation during the 1970s, and the site had been divided between the Southern Golf Club (formerly Brighton Golf Club), Mentone Grammar School Sports Centre, and other sports facilities, the Melbourne Water fauna and wetlands park and industrial sites on the western side, of which the Woodlands Industrial Estate is the most prominent. The park is a mixture of wetlands, grasslands and woodlands. The stables which housed Phar Lap fell into disrepair and were destroyed by fire in 1982.

In 2000 construction began on a housing estate west of Springvale Road, between Governor Road and the Mordialloc Creek drain. Named Waterways, the estate was designated a suburb in 2002. Elsewhere in Springvale Road there are an Australian Croatian church and a Church of Latter Day Saints.

The population of Braeside is mainly workers and visitors. In 1933 there was a census count of 169. A freeway reservation for Mornington Peninsula bisects Braeside.

At the 2011 census, Vietnamese, Mandarin and Cantonese language groups were 16.2% of the population.

G.M. Hibbins, A history of the City of Springvale: constellation of communities, Port Melbourne, 1984 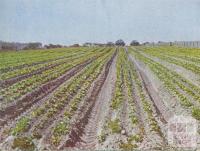