Box Hill North, 14 km east of central Melbourne, is bordered by the Koonung Koonung Creek on the north, and stretches east-west across the whole of the former Box Hill municipality. Its southern boundary is about 300 metres north of Whitehorse Road, giving it dimensions of about three km by two km. It was the last part of the former Box Hill municipality to be developed residentially, mainly because its nearest public transport service was south of Whitehorse Road at the Box Hill railway station. In Woodhouse Grove there is a heritage listed Uniting Church chapel, originally Wesleyan (1856).

When World War II ended Box Hill's population was mainly in an east-west band centred on Whitehorse Road. To the south there was a mixture of dairy farms, scattered houses and undeveloped subdivisions. To the north the landscape was even more rural, as orchards overlooked the Koonung Koonung Creek and across to Doncaster. The rapidity of residential growth is traceable in the opening of schools: primary schools opened were Box Hill North (1954) (301 pupils, 2014), Koonung Heights (1954) and Kerrimuir (1959) (300 pupils in 2014); and the Koonung Heights secondary college was opened in 1965. Shopping centres are confined to groups of a few shops, as Doncaster Shoppingtown and Box Hill Central are within reasonable driving distance. The Kerrimuir local shops are in Middleborough Road.

The street layout is mostly in a grid, predating the subdivisions with cul-de-sac design to filter out through traffic. Neighbourhood parks are fewer than for later subdivisions, but there is a scattering of reserves, one of them linear along Bushy Creek. At either end of the creek there is Springfield Park and Elgar Park, the latter adjoining Koonung Koonung Creek and having ovals and a miniature railway. 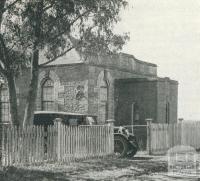