Boorhaman is a rural village near the Ovens River, 15 km north of Wangaratta in north-eastern Victoria.

The Boorhaman pastoral station was recorded in 1865 as a subdivision of the earlier Botherambo pastoral run (1839). The origin and meaning of the word are uncertain.

Boorhaman is situated in flat, open country, with a State forest on the Ovens River flood plain two kilometres west. It is an agricultural district and the village has a hotel with a small brewery, public hall (1897), golf course and a Catholic church (1887). The Methodist church was removed to Eldorado in 1965, the same year when reticulated electricity was turned on in the district. A branch railway line (1927) through Boorhaman closed in 1986.

The school was an attractive building and had seven pupils before it closed in 2008. There were also schools at Boorhaman North (1880) and Boorhaman East (1889-1975).

Boorhaman's census populations have been: 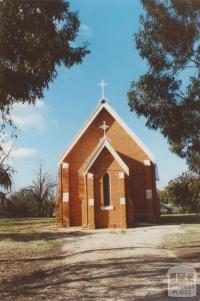