Bonbeach is a beach suburb 32 km south east of central Melbourne, between Chelsea and Carrum. Its southern boundary is the Patterson River, an artificial channel (1879) which drained the Carrum Swamp (see separate entry).

Bonbeach is on the railway line from Mordialloc to Carrum, and its station (1926) was the last to be opened in the group from Aspendale to Carrum. Bonbeach post office opened four years before. When opened, the station was mostly for the benefit of beach goers and people with holiday houses. The 1927 Sands and McDougall directory recorded 12 holiday houses and 7 permanently occupied houses in Williams Grove which runs down from Point Nepean Road to the beach. Houses in Point Nepean Road and in Broadway were about half and half permanents and holiday use. Bonbeach has a long sandy stretch of clean beach. A surf life saving club opened in 1932, and its whole length is reserved for swimming, free of personal watercraft.

Urban growth came after World War II. In 1958 State primary (226 pupils, 2014) and high schools opened on the Sand Pits land in Breeze Street, a site left vacant by a glass-making company. Immediately east of the schools there was the Patterson River golf links (1926). The golf links began as a privately owned public golf course. Its grand club house was built in 1933 and the whole concern was sold to the Patterson River Country Club in the 1950s. The Bonbeach sports reserve is on the golf course’s northern boundary. It has five ovals and is home to the Bonbeach football (1962) and baseball clubs.

The Bonbeach high school closed in 1989 and houses a community centre were built on its land. During the 2000s Bonbeach’s bayside position has attracted residential construction, particularly row houses and flats. Comparative figures from the 2001 and 2011 census are:

Bonbeach’s census populations have been: 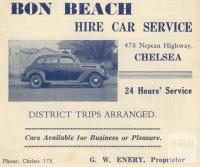