Black Hill is a residential suburb immediately north-east of Ballarat central. Its southern border is the Yarrowee Creek, from where it rises to the Black Hill reserve with a lookout from where Ballarat and Ballarat East can be viewed.

The locality was a gold-diggings site as early as August 1851. It seems that in the previous summer a fire blackened the landscape, giving rise to the name. A school was opened in 1861 and replaced by a building on the present school site in 1878. Local clay was used for brick-making.

Black Hill was recorded in the Victorian municipal directory as a farming locality until the 1950s. Chisholm Street was the main thoroughfare where there was the school and a grocer's shop. By the late 1960s Black Hill was becoming a residential area.

Enrolment at Black Hill primary school was 538 in 2014. East of the school there is a recreation reserve with a swimming pool.

Black Hill's census populations have been: 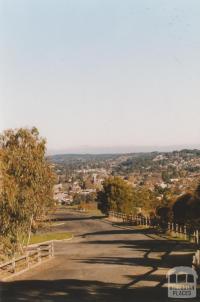