Birchip is a rural town on the Sunraysia Highway and the railway line from Melbourne to Mildura, north-west Victoria. It is approximately 270 km north-west of Melbourne and on the eastern fringe of the Mallee region. Birchip was the administrative centre of Birchip Shire (1895-1995).

Birchip was named after the Wirrumbirchip pastoral run which was taken up in 1842. The name is thought to be derived from an Aboriginal expression describing the track followed around the dense Mallee country when travelling towards Swan Hill.

Pastoral occupation began to give way to farm selections in the 1880s in the Birchip district. There had been a store and hotel (dating from 1866) serving the squatters and increasing numbers of selectors, and in 1882 another store was opened at the intersection of five tracks. It became the future site of Birchip. A township was surveyed in 1887, and town allotments were sold two years later, by when there was a school (1887), two stores, a hotel, a boarding house and a church. Lockwood's general store was opened in 1888 and its proprietor, Joseph Lockwood, became president of the Birchip Progress Assocation (1890) and shire councillor (1895-1955). In 1903 Birchip was described in the Australian handbook: 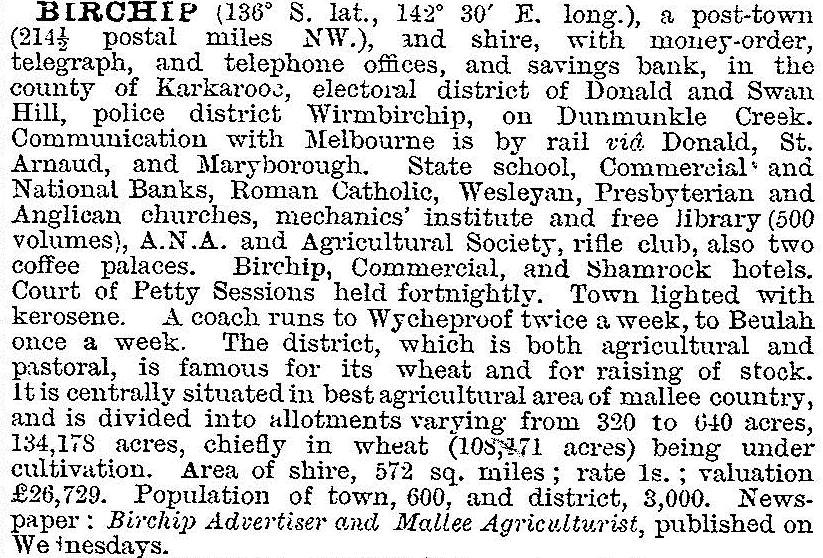 Birchip Shire was created by severance from St Arnaud Shire on 6 April 1895. Its first name, Wirmbirchip, was shorted to Birchip on 8 November 1895. Generally oblong in a north-south direction, the shire's other settlements of Morton Plains, Curyo and Watchupga were clustered along the railway line and the nearby parallel Sunraysia Highway. In 1995 its area was 1468 square kilometres.

By 1901 Birchip township had a population of 484 people, servicing a shire with 2190 people. In addition to the buildings previously mentioned there was the Birchip Advertiser and Mallee Agriculturist newspaper (1891), Methodist, Presbyterian, Anglican and Catholic churches (1891-94), an agricultural and pastoral society (1893), a flour mill (1894) and the extension of the railway from Donald to Birchip (1893). Birchip was the terminus until the next extension in 1899, a period of relative prosperity before the drought period which peaked in 1902.

The Birchip Waterworks Trust was formed in 1898 and constructed a supply channel from Lake Tchum, seven kilometres east of Birchip, in 1901. In 1905 the State Rivers and Water Supply Commission took over local water trusts and began water supply works. Ultimately Birchip was supplied by the Western Waranga Channel and by two channels from the Grampians storages. By 1906 agricultural prosperity returned to Birchip, and the populations of both the town (1208) and the shire (3190) in 1911 were figures that have never been exceeded. A local electricity supply undertaking (1911) was one of the first in Victoria.

In 1922 the primary school was extended to higher elementary standard, and a Catholic primary school (1919) supplemented it. The council and the township, however, became moribund during the 1930s, allowing infrastructure to deteriorate. Two useful things were the J.E. Taylor tree planting bequest (1930s) and a survey by form three students which revealed that, from a sample of 186 houses in the town, half were substandard. A general upgrading of urban amenity followed, coinciding with the postwar boom in rural commodity prices. It was during the approach of that boom that the Australian blue book described Birchip and the shire in 1946: 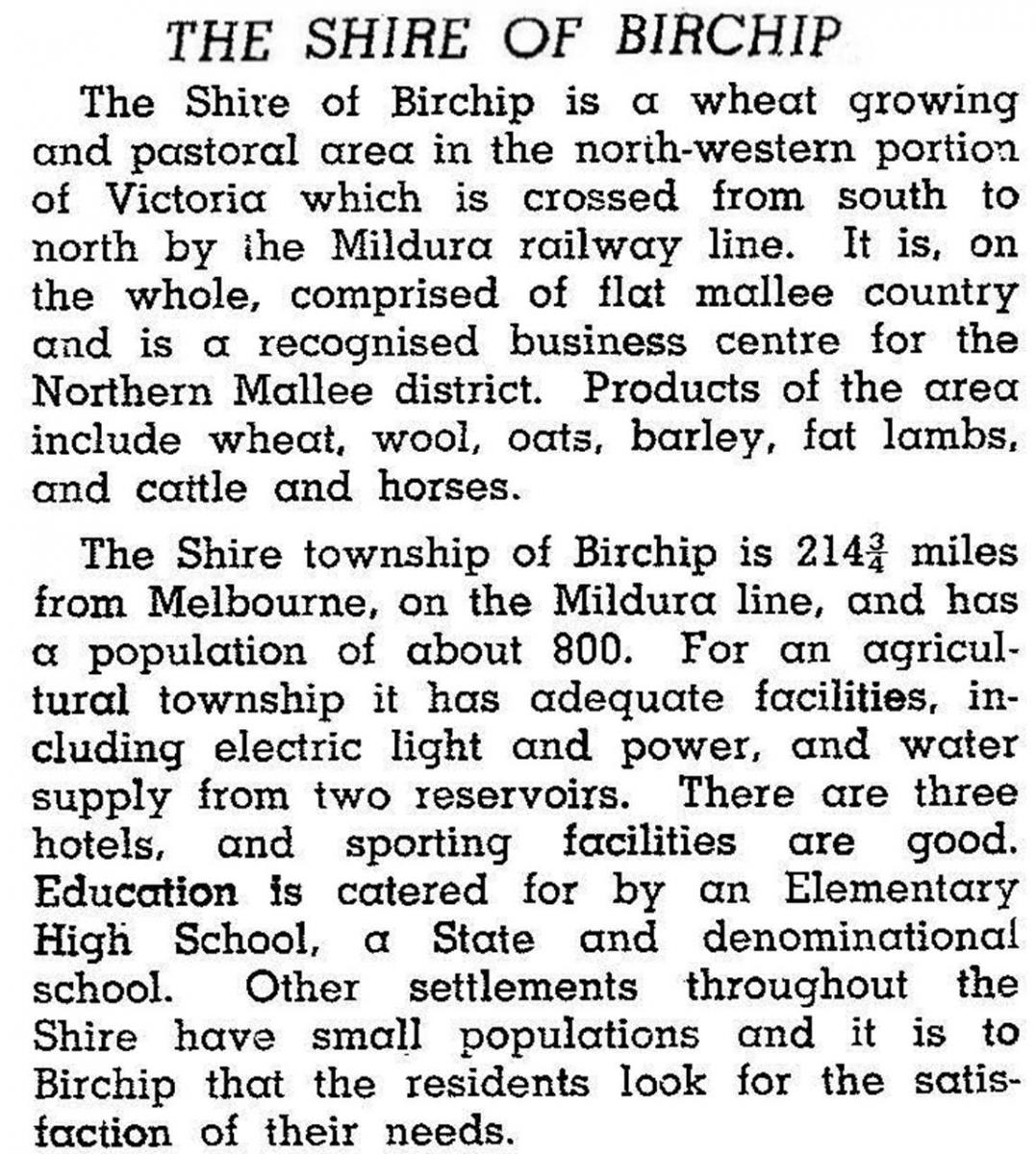 In 1954 a town swimming pool replaced Tchum Lake, which had been the aquatic centre since 1940. The higher elementary school was replaced by a high school in 1964 and municipal expenditure was finally committed in 1968 to a town sewerage scheme. A drive-in picture theatre was also opened. The wheat silos in the shire had been expanded to 2.55 million bushells, five times their capacity when first built in the 1930s.

The district's reliance on wheat and wool has been a root cause of farm mergers. There was a population decline during the 1980s-90s, more pronounced in the shire than in Birchip township. In 1994 farming occupied 94% of the shire's area carrying 94,900 sheep and lambs and 9000 pigs. Wheat harvested was 73,570 tonnes and barley was 69,180 tonnes. In 1992 the Birchip Cropping Group was formed, a non-profit research body for cereals, fodder soils and water science. Its membership of nearly 500 is distributed throughout the Mallee and the Wimmera.

Birchip was the administrative centre of its shire, and has a branch office for the Buloke Shire into which Birchip Shire was incorporated. The town also has Anglican, Catholic and Uniting churches, State (1-12) and Catholic primary schools, a P-12 school (234 pupils, 2014), a hospital and a nursing home; two hotels, a motel and a caravan park; bowling, football, golf, harness racing facilities, a swimming pool and a leisure centre; a showground, saleyards, local reservoirs and an aerodrome. The main street, Cumming Avenue, has a grassed median with mature trees. North Lake Tchum is a wildlife sanctuary and the south has facilities for water sports.

The state government's Department of Primary Industry office in Birchip, that provided support and advice to the region’s farmers, closed in 2012.

The town's census populations have been:

On 20 January 1995, Birchip Shire was united with Wycheproof Shire, most of Donald Shire and part of Kara Kara Shire to form Buloke Shire. The shire's census populations were:

Anne McClelland, My blood's country: the spirit of Birchip, Birchip, 2009

June Senyard, A country album: a photographic history of the Shire of Birchip, Hyland House, 1995

June Senyard, Birchip - essays on a Shire, Shire of Birchip, 1970