Barwon Heads and the immediately abutting settlement of Ocean Grove are coastal resort towns, which since the 1960s have become outer suburbs of Geelong, just 19 km away. Because of their coastal topography and a bevy of late nineteenth century churches, both towns retain much of their original charm. The charms of Barwon Heads got national attention in the late 1990s with the Sea Change television series, starring Sigrid Thornton and David Wenham. For 39 episodes ABC viewers could admire the wooden road bridge, the estuary, the jetty and the ‘Beach House’, now a tourist mecca. The series captured the penchant of many Australians to escape the city for the apparent simplicity of life in a small coastal community.

Barwon Heads is a seaside township on the west side of the Barwon River where it enters Port Phillip Bay on the south side of the Bellarine Peninsula. It is 18 km south-east of Geelong. The name derives from the Barwon River, named Kondak Baarwon by John Helder Wedge, surveyor, in 1835. The word is thought to be Aboriginal for great, wide or deep water.

Settlement at the mouth of the river began on the eastern (Ocean Grove) side in 1854, and settlement on the other side at Barwon Heads was delayed until 1875. It was a boating and fishing place, with waterfowl upstream at the Lake Connewarre swamp lands. A park trust was formed to maintain a public reserve and install basic amenities. A school, Connewarre East, was opened in 1885.

Barwon Heads was described in the Australian handbook in 1903:

By the early 1920s the township had a hotel, boarding houses and a golf links (1907). The river was bridged in 1927. Barwon Heads became a holiday destination for Geelong residents, and the provision of camping facilities on the foreshore near the Barwon Head or Bluff attracted many holiday makers. By 1970 there were nearly 1000 sites for caravans and tents. With an estimated population of 2100 (1996) the peak summer population reached 7400 with holiday makers.

Barwon Heads' residential areas are softened by roadside verges and tea tree; some roads are unsealed. The town area is relatively low-lying, protected by a levee bank from flooding from the Barwon River. All the coast has a foreshore reserve, backed by the golf course and camping reserve. A smaller reserve separates the town from the river bank.

There is a main shopping street, Anglican, Catholic and Uniting churches, a community hall and senior citizens and pre-school centres. Towards the north of the town there is the Barwon Heads Village Park, with sports facilities. The residential area extends beyond there to the river where it opens to Lake Connewarre. There is a look-out at the Bluff at the river mouth, giving views to the other side of the Port Phillip Bay. The look-out has a monument to survivors of the Earl of Charlemont shipwreck (1853), some of whom pioneered the district.

The golf club house (1924) and the bridge over the Barwon River (1927) are heritage listed. The town, and its heritage listed timber bridge, came to national attention with the filming of the ABC television series Sea Change (1998-2000), for which Barwon Heads was named Pearl Bay. Proposals to rebuild the wooden Barwon Heads Bridge in 2006 and again in 2009 met with community opposition. A new road bridge and separate pedestrian bridge opened in 2010. Soon the town itself was the destination of real life sea changers. The Barwon Heads primary school had 412 pupils in 2014.

Locally-based cyclist Cadel Evans won the Tour de France in 2011. An elite international cycling event for men and women named in his honour starts and finishes in Geelong and passes near Barwon Heads. 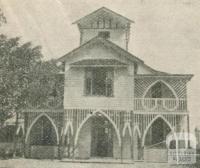 Panorama over Barwon Heads towards the bluff, 1964

Looking east over the camping ground and the river at Barwon Heads, 1964