Barraport is a rural locality 13 km north-west of Boort in north-western Victoria, on the railway line from Boort to Robinvale.

Originally named Barrapoort, the second syllable of the name was derived from Boort. The first syllable is thought to be derived from an Aboriginal word meaning bit. The change from Barrapoort to Barraport came about when the railway station name was formalised.

Settlement on one square mile (2.6 sq km) farm selections began in the early 1870s. Most of the land was timbered with Mallee and Murray pine trees, much of which was rolled and destroyed. Large shade trees were kept. In 1874 a hotel and a Baptist church were opened.

The construction of the railway line in 1886-87 caused the village centre to be shifted, but the area’s first school was opened in 1889 at Barraport North (known as Gredgwin Village). Two other schools were opened in the area generally defined as Barraport West, and Barraport’s school opened in 1915. It continued until 1968.

A cooperative grain shed was opened at the railway station, and Barraport has barely exceeded the shed, the station, a blacksmith, a post office and a store. Local football and cricket teams played until the 1960s.

Barraport is now identified by the railway silo and grain bins, first constructed in 1941.

Barraport’s census populations have been: 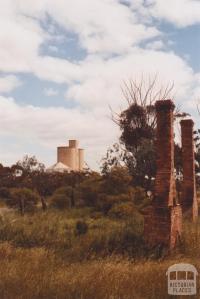