Balwyn North, a residential suburb, is 10 km east of central Melbourne. It is separated from Balwyn by Belmore Road and extends northwards to the Eastern Freeway in the Kooning Creek valley.

In 1937 Balwyn North post office in Burke Road was opened and four years later it moved to the shops on the Doncaster Road tram line (1938) at Bulleen Road.

Balwyn North, larger in area than Balwyn and Deepdene together, is predominantly postwar in its residential growth. In 1941 Balwyn North was described as the next housing-site destination after the occupation of the Mont Albert Ridge in Balwyn was completed. The Doncaster Road ridge, Balwyn North, had a view of the Yarra Valley and the Koonung Creek and in the opalescent distance, the sprawling city. Balwyn North was a mixture of expensive suburban houses with beautiful gardens, and decayed dairy farms and orchards with tumbled down fences awaiting subdivision. The shops at Burke Road and Doncaster Roads are known as Dickens Corner, the site of G.J. Coles and Co's first Supermarket (1961), which traded under the S.E. Dickens grocery banner.

There are three large reserves with ovals and other facilities. Greythorn named after Greythorn Road (so named because the first proposed name, Whitethorn, was too like Whitehorse), is a locality within Balwyn North. So too is Bellevue, near where Bulleen Road joins the Eastern Freeway as it skirts Balwyn North.

During the 1950s Balwyn North was Melbourne's archetypical up-and-coming middle class suburb with triple fronted residences, decorative brickwork and picture windows. The passage of years, maturing gardens and a patina of wear on the building finishes has made its middle classness less conspicuous.

'Dickens Corner' at Doncaster and Burke Roads is the site of G.J. Coles and Coy's first Australian supermarket (1961), which originally traded under the S.E. Dickens grocery banner. It was probably an ideal choice of location for a car-based community with middle class tastes for trying the latest thing. Like most of Balwyn North's shops, the supermarket was of a modest scale fifty years later.

North Balwyn's census populations have been: 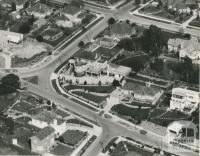