Ballarat shire (1863-1994) was a municipality of 482 sq km north-west of Ballarat. It included the Ballarat suburbs of Alfredton and Wendouree which constituted over 80% of its population. The population's concentration caused the shire offices to be transferred from the traditional centre of Learmonth to Wendouree in 1964.

Ballarat shire had limited gold mining and instead developed several large pastoral runs and numerous agricultural holdings. Learmonth and Burrumbeet were the main townships. The shire was proclaimed on 24 November 1863. Its council had unusual stability, with second and third generation councillors serving continued terms of 50 years or more. One councillor had nearly 60 years in office, serving as shire president on five occasions. The shire's population stood at about 4200 persons in 1900 and barely wavered from that until the early 1950s when the urban/industrial growth began on its eastern fringe. In 1946 the shire was described in the Australian blue book:

Sheep for wool and fat lambs were the shire's main livestock industry. In the 1960s there were about 7500 dairy cattle, but by 1994 the number was 1969. Meat cattle increased four-fold during 1960-94, to about 13,000. Sheep and lambs were steady at about 160,000. Potatoes were harvested in 1994, apporximating 12,500 tonnes. Together with potatoes from Bungaree and Creswick they supplied a large McCains vegetable processing factory at Wendouree West. In 1994 about 72% of the shire was farmland.

On 6 May 1994 Ballarat shire was united with Ballarat city, Sebastopol borough and parts of Bungaree, Buninyong and Grenville shires to form an enlarged Ballarat city.

James Mitchell, Progress in the Shire of Ballarat, the shire, c1972 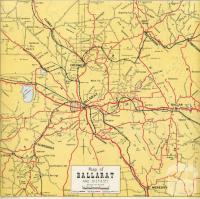 Map of Ballarat and District, 1957 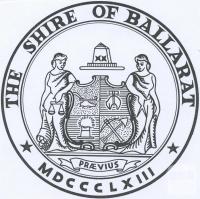 The Shire of Ballarat Crest