Ararat Rural City was formed on 23 September 1994 by the union of Ararat city, the surrounding Ararat shire and parts of Mortlake and Mount Rouse shires. Its area is 4210 sq km and its administrative centre, Ararat, is about 200 km north-west of Melbourne.

The rural city's western boundary is in the Grampians mountain range and its eastern boundary passes through the Mount Buangor range. Most of the rest of the municipal area is undulating to flat, increasingly flat in the south as the area approaches the western lava plains.

Ararat city is centrally positioned in the north of the shire and in 2011 had 63% of the rural city's population. It is at the junction of main roads and railways: the Western Highway (Melbourne to Horsham) intersects the road from Mortlake and the road north east to Maryborough; railways fan out to Melbourne, Horsham, Hamilton and Geelong. The south of the shire is crossed by the Glenelg Highway (Geelong to Hamilton via Lake Bolac). The rural city's two largest country towns, Lake Bolac and Willaura, are in the south.

The south is predominantly sheep grazing country. In the whole municipality sheep and fat lambs outnumbered cattle by 5:1, numbering nearly 1.4 million head in 1994. Farm employment has concentrated but the rural city's population has stayed at about 11,100 since the mid-1990s. That has been something of an achievement as government employment in Ararat has been affected by the closure of the railway locomotive depot, the gaol and the asylum. An ageing population, however, puts extra demand on health and community services.

In 1996 the leading employment sectors in the rural city were:

Published employment data for 2011 is not comparable with the 1996 data, except to say that 'sheep, beef cattle and grain farming' recorded 13.2% of employment. The median age of the rural city's residents in 2011 was 45 years and their median income was 86% of the Victorian median. Comparable median ages were 43 years in Ararat urban centre and 37 years in Victoria. 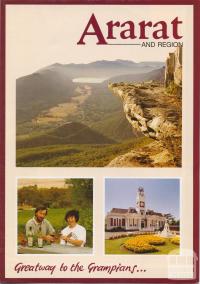