Altona is a residential and industrial suburb 13 km south-west of central Melbourne. It is on an indented bay (Altona Bay) on Port Phillip Bay, and the industrial sector extends several kilometres inland. Altona's southern boundary is Skeleton Creek (separating it from Werribee), and its opposite boundary is Kororoit Creek (separating it from Williamstown).

The coastal part of Altona is alluvial flats and recent estuarine deposits, with alluvial valleys extending inland along the Kororoit, Cherry and Laverton Creeks. The last two drained into swamps. Inland are newer basalt plains.

In 1842 (or probably before then), Alfred Langhorne leased pastoral land on Altona Bay, and shortly afterwards began building a homestead. The area was then known as Laverton. The homestead became known as 'Altona' by the 1860s. The reason for the name is not clear, but in 1843 a neighbour of Langhorne's, R. Wrede, gave his residential address as Altona, Port Phillip Bay. In any event Langhorne's homestead acquired the name 'Altona', and it is in Queen Street, Altona, having served as a Council office and a community centre. 'Altona' derives from a German village on the River Elbe, later a suburb of the Hamburg seaport.

Altona and Laverton were occupied for pastoral purposes. Prominent landowners were the Chirnside family, the Cherry family (hence Cherry Lake), and the Blackshaws (hence Blackshaws Road). In 1881 a coal prospecting company was formed in Williamstown for the purpose of winning coal at Altona. Brown, not black, coal was found and water penetration was a problem in the bores and tunnels. The activity, however, caused Altona to be noticed, for in 1882 a Sanitarium for infectious diseases was opened in Altona East.

In 1887 a syndicate acquired the Altona/Laverton property which had been assembled by Langhorne (who died in 1874), and marketed it as Altona. They commenced the connection of Yan Yean water, a railway extension from Newport and lengthening of the pier to deeper water for bay excursion boats. A nearby attraction was the Williamstown racecourse (now the Altona Sports Park). Land sales took place in 1888 and the train service commenced. Actual settlement at Altona, however, was meagre. The train service ceased in 1890, and Altona's industrial potential was again assessed. Fresh coal mining ventures were started, and the colonial government established an explosive-storage depot near Skeleton Creek, Altona West, relieving a similar facility at Footscray. (The explosives-keeper's house is visible from Queen Street.) Proposals were examined for using the coal for the generation of electricity and for iron smelting. The Melbourne and Altona Coal Mine continued until 1919, and another one operated in the early 1930s.

Altona's growth was slow, although enjoying moments of fame when early aeroplane flights were made by Gaston Cugnot (for the French Bleriot planes), and by Joseph Hammond in 1910 and 1911. Apart from coal mining the main industries were dairying, poultry, piggeries and the growing of animal fodder.

In 1913 a syndicate of Sydney entrepreneurs began replicating their success in developing beach-side suburbs by laying out generous subdivisions at Altona. The syndicate also established Seaholme, immediately to the east of Altona. Land sales began in 1917, and the railway recommenced. Two years earlier a primary school had been opened in Altona and Baptist church services begun. Residents obtained relatively cheap land on large blocks, and put up houses as owner-builders. During World War I some families with German or other origins associated with enemy nations found it better to settle at Altona out of reach of patriotic workers at Newport. In 1920 land sales picked up, and houses were built with help from the War Service Homes Commission and the State Savings Bank.

In 1924 the Commonwealth Oil Refinery (C.O.R.) began production east of Seaholme. The refinery had mixed results: whilst providing local employment, the sulphur compounds in its effluent made the area smell. However, suburban comforts came to Altona with electrified trains, the promise of reticulated water and a shopping centre with a cinema. Subdivisions were released during 1928-29 at Altona North, Paisley and Galvin, the latter two being supplied with stations on the railway line to Geelong.

One suburban facility lacking in Altona was a hospital, until one was opened in 1932, financed by public subscriptions. It was kept during the Depression by fund raising, donations of fish and eggs from local producers and by working bees.

During World War II effluent entered Altona Bay from a plant to the west, the I.C.I. munitions factory at Deer Park. It poisoned the kelp, an important fish-breeding ground, and damaged Altona's fishing and local amenity. Although the discharge was stopped, Altona's seaside reputation was not enhanced during the war.

In 1949 Vacuum Oil began operating a refinery at Paisley, and in 1953 the Mobil town railway station (Altona line) was opened to serve the refinery. Two years later a catalytic cracking plant increased production tenfold. There was a rapid growth in postwar population, and a new Seaholme primary school opened a little earlier in 1952. The Altona Yacht Club was formed at about the same time.

Altona was a destination for many postwar European migrants, and temporary and hostel accommodation was provided at the Williamstown racecourse and later on land on the other side of the Kororoit Creek at Wiltona Hostel.

The land at the Galvin railway station became the location of major petrochemical works in the late 1950s when Slough Estates purchased the large triangular wedge west of where the railway line crosses Kororoit Creek Road. The Altona Petrochemical Company's plant came into production in 1961 and several others followed - synthetic rubber, several chemical plants and Union Carbide.

During the 1960s and 1970s Altona's residents were troubled by air-borne particles and unpleasant chemical smells. Suspicion fell on petrochemical plants, although decaying seaweed might have been a cause. Air monitoring and political agitation reduced the incidents, and the closure of the Paisley briquette yard in 1972 removed an obvious cause. In the early 1970s sewerage connections were completed and reticulated water supply improved. The local hospital, a source of pride, was enlarged.

Altona township's shopping centre in Pier Street has maintained its precedence. Drive-in shopping centres have been built further afield, in Altona North and Altona Meadows. During the 1980s the Pier Street shops were extended north of the railway line, unusual for a suburban strip. The Altona Esplanade has numerous beachfront houses that regularly fetch twice the median price for Altona houses.

North of the town the swamp area has become the Cherry Lake, surrounded by a conservation reserve and several sports facilities; to the east are a coastal park, yacht club and marina; and the western swamp area has water treatment works and open space reserves. At its extremity is the Kooringal Golf Club and a wetland which was previously the Cheetham Salt Works. Beach works during the 1980s stopped sand erosion. In 1985 the railway line was extended west of Altona to join the Geelong line at Laverton and the Westona station was opened. A Catholic girls' college and shops are near the station.

The community has a high proportion of residents from southern and eastern Europe, with high proportions of religious adherents of both Catholic and Orthodox churches.

The schools in the suburb of Altona have been:

Altona had unusual municipal government, electing councillors by an unsubdivided municipality (ie no wards) and keeping them re-elected. Although in a Labor area, the Labor Party gave up endorsing candidates when the voters' preference for good local candidates was overwhelmingly obvious. The council staved off takeovers from Werribee and Williamstown Councils in the 1980s. When the 1994 amalgamations happened, Altona city was united with Williamstown city and parts of Werribee Shire and Footscray city to form Hobsons Bay city (22 June). By then the Altona municipality contained Altona Meadows, Altona North and the smaller localities of Paisley and Seaholme.

Between 1987 and 1996 the median house price in Altona was less than the median for metropolitan Melbourne. In 1998 Julia Gillard purchased a modest three-bedroom cream brick house in Altona as she embarked on her federal parliamentary career. Becoming Australia's 27th Prime Minister and leader of the Australian Labor Party in 2010-13, Julia Gillard sold the home in Medford Street in 2013 after she left politics, well over the reserve price. She said that she would miss the village feel of the suburb and walking her dog at Cherry Lake.

The census populations for Altona township and Altona municipality were:

At the 2011 census the median age of the suburb's residents was 42 years (Australia 37 years, Altona Meadows 37 years). 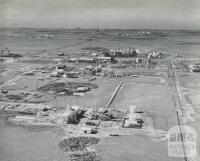