Alma is also situated on the junction of the Adelaide-Inkerman gold lead and the Timor Creek. Like Inkerman, Alma’s name arose from the Crimean War: the first Crimean battle took place at the Alma River in September 1854, and gold was discovered at Alma in December 1854. It was also known for a short time as Joyce’s Diggings because of its proximity to Alfred Joyce’s ‘Norwood’ pastoral run west of Timor Creek.

There was a pause after the easily won gold was taken, but in 1857 mechanical mining of the deep, wet ground began. Alma mines gave rich payoffs for another 30 years. The two notable companies were the Golden Gate and the Alma Consuls.

A school was opened by the Church of England in 1856, which was superseded by a government school in about 1862. In 1884 the Australian handbook recorded a store, a hotel, school (average attendance 84 pupils) and an Episcopal church in Alma. By the turn of the century agriculture had nearly displaced mining. Alma was described in the 1903 Australian handbook:

The school closed in 1931 and reopened for four years before finally closing in 1937.

Alma has several old gold workings, a few buildings and a car and motor bike track to its west. Its census populations have been: 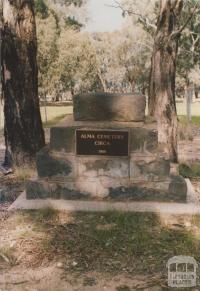