Allans Flat is a rural district in north-east Victoria, 20 km south of Wodonga. It is on the Yackandandah Creek and was linked to the gold mining industry which moved along the creek from Yackandandah.

Allans Flat was reputedly named after Edwin Allan who settled or arrived in the area in 1853.

Gold mining at Allans Flat began in about 1856, and three years later a school was opened. Although founded on mining, Allans Flat was also noted for farming, including fruit and vegetable growing. Mining was substantially revived during 1902-04 when gold dredging was carried out in the Yackandandah Creek. A large depression left by the dredging was formed into a lake and the adjoining space was made the Allans Flat recreation reserve. In 1903 Allans Flat was described in the Australian handbook:

After the conclusion of gold dredging Allans Flat became a typical rural hamlet with a hall, a church and a school, but with scope for agriculture which has been realised with Schmidt’s strawberry winery. Tourism in the Yackandandah and north-east areas enabled the opening of a motel and a pastry shop. The school however was closed in 1994. Allans Flat’s census populations have been: 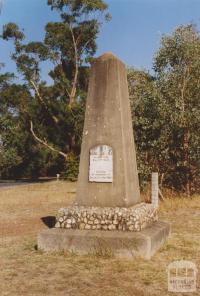